THE FOLLOWING PRODUCTS ARE NOT CERTIFIED KOSHER!

THE FOLLOWING PRODUCTS ARE NOT CERTIFIED KOSHER!
This list is based on information received from the Star-K, CRC, OK, the OU and various companies.

Many bread products contain an amino acid known as L-cysteine, which is used as a softening agent. L-cysteine is derived from either human hair or Hog or poultry feathers, and it can be found in many popular brand-name products. Businesses that have acknowledged they've used L-cysteine include Lender's, Einstein Bros., McDonald's and Pizza Hut.

L-cysteine (sometimes shown as E920 on food labels) is used as a dough conditioner and strengthener, meaning the dough can be stretched out to make a pizza crust, for example. L-cysteine can also help extend the shelf life of commercial breads. L-cysteine is an amino acid (building block of proteins) and is perfectly safe for human consumption.

Most L-cysteine is sourced from China, where feathers are collected from farms, and human hairs from the floors of barbershops. The feathers and hairs are processed in Chinese factories, where L-cysteine is extracted in a chemical process.

Beer and wine
Isinglass, a gelatin-like substance collected from fish bladders is used in the clarification process of many beers and wines. Other agents used for the process of fining include egg white albumen, gelatin and casein.

Candy
Numerous foods contain gelatin, a protein derived from the collagen in cow or pig bones, skin and connective tissues. It's often used as a thickening or stabilizing agent and can be found in a variety of candies, including Altoids, gummy candies and Starburst chews, among others.
Also, many red candies contain a dye made from the extracts of dried bodies of the Coccus cacti bugs. The ingredient is often listed as carmine, cochineal or carminic acid.

Non-dairy creamer
Although it has non-dairy in its name, many such creamers contain casein, a protein derived from milk.

Peanuts
Some brands of peanuts, such as Planters dry roasted peanuts, also contain gelatin because the substance helps salt and other spices adhere to the nuts.

Refined sugar
Sugar isn't naturally white, so manufacturers process it using bone char, which is made from the bones of cattle. To avoid sugar filtered with bone char, purchase unrefined sugar or buy from brands that don't use bone-char filters.
The refining processes for both white and brown sugar often use bone char, a granular material from animal ashes. It gives sugar its white color.
Refried beans
Many canned refried beans are made with hydrogenated lard, so check labels to ensure you're buying vegetarian beans.

Cake mixes
Cake mixes sometimes contain beef fat, according to Ann Byrn's book, "The Cake Mix Doctor." Many call for oil or shortening while others just add dehydrated versions of these to minimize the additional ingredients required. Hostess, a confectionery company which recently went under new management, also puts beef fat in their famous cupcakes.
Red candy
Red cochineal beetles, when dried and crushed, produce a powder called carmine, which is used as an all-encompassing dye in red foods like candy, ice cream, and yogurt. Though it previously slipped under the radar as "artificial coloring," the FDA has required manufacturers to explicitly list carmine on food labels since early 2011.
Edible shellac, also known as confectioner's glaze, coats most hard, shiny candy, with the notable exception of M&Ms. It's made from the excretions of female lac bugs (Kerria lacca).

Perfume
Some scents, especially those that smell like vanilla, list castoreum as an ingredient. Castoreum comes from beavers' castor sacs — a gland located between the animal's pelvis and the base of its tail.
Plastic bags
Many plastics, like commercial shopping bags, contain chemicals often referred to as "slip agents," which are derived from the stearic acid in animal fat. They essentially prevent the polymers from sticking to metals during manufacturing and clinging to each other afterward. Some bike tires also contain these elements.
Downy
Downy, the detergent endorsed by the snuggly child, contains dihydrogenated tallow dimethyl ammonium chloride — or a derivative of rendered cattle, sheep, and horse fat mixed with ammonium. This process creates a quaternary ammonium compound, or a quat, which basically coats your clothes in lipids, making them feel soft.
Nail polish
Shimmery cosmetics, like nail polish or lipstick, contain guanine (sometimes listed as "pearl essence"), one of the four base components of RNA and DNA. Companies obtain it from fish (notably, herring) scales.
Crayons
As part of the rendering industry, which disposes of otherwise unused animal waste, the creation of crayons often includes animal fat, according to a 2004 Congressional report.
Paraffin is the main ingredient in the most popular crayons, but not many would expect mammalian byproducts in children's art supplies.
Cigarettes
Hemoglobin derived from pig's blood is — or at least once was — included in some cigarette filters.
Posted by SY Deals at 7:39 PM No comments: 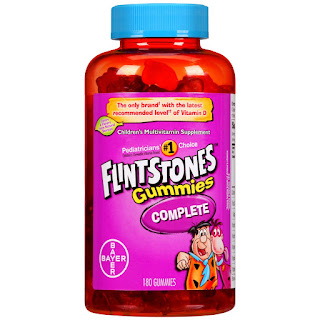 All of the bayer multivitamins contain gelatin derived from either beef, pork or both. I reached out to Bayer and here is the response I got from their consumer advisor.
Thank you for taking the time to contact Bayer HealthCare. We appreciate your interest in Flintstones® Gummies.
However, all of our multivitamin products do contain gelatin. Gelatin is used in the raw materials to impart the characteristics of flow and make it into directly compressible for tableting. It is sourced from beef, pork, or a combination of both.
If I may of further assistance, please contact us at 1-800-800-4793 or bayercare.com
Sincerely

Q: Do Mini-Wheats have pork gelatin? If not, what kind?
A: Gelatin is used to help the texture of the product and is derived from either beef or pork. Gelatin derived from beef is found in all varieties of Kellogg's® Frosted Mini-Wheats® cereal. I have included the information for our other products below.

Gelatin derived from pork is found in the following:

Gelatin derived from beef is found in the following:

Some of our foods contain gelatin that is derived from either beef or pork; sourcing is based on availability in the marketplace. These include:
Please note that none of our equipment that comes in contact with the gelatin in Kellogg's® Frosted Pop-Tarts® is used in the production of the other pastries
Source
Posted by SY Deals at 7:19 PM No comments:

We do not have certification in place from the Halal authority or the Kosher board for any Wrigley products.

Please be advised that in our STARBURST® Jelly range, we use gelatine derived from either beef or pork. This will depend on the raw material available at the time of production.
Posted by SY Deals at 7:12 PM 1 comment: